Greg and Stones into Schools by Greg Mortenson, illus. Philomel keeps things on the QT with Shhh! Erickson, illus. Speak lights the way with Illuminated by Erica Orloff, in which a teenager discovers a diary within an antique book chronicling the doomed love of Heloise and Abelard.

The Medicalization of America's Schools

Pineapple Press goes a-haunting with Ghosts of the Carolinas for Kids by Terrance Zepke, a collection of 16 spooky tales. Seuss, a collection of seven rarely seen stories; Ashtown Burials 1: Ashtown by N. Nash, illus. Alfred A. Wendy Lamb Books unlocks the season with Eight Keys by Suzanne LaFleur, in which a girl discovers a mysterious key with her name on it; R My Name Is Rachel by Patricia Reilly Giff, a Depression-era novel in which three children move with their father from the city to a rundown farm; The Summer I Learned to Fly by Dana Reinhardt, about a cautious girl embarking on her first true friendship with a charismatic boy; Paintings from the Cave by Gary Paulsen, in which the author explores the healing power of art and animals in three novellas; and Empire of Ruins by Arthur Slade, third in the Hunchback Assignments fantasy series.

Brian Karas, about a new boy in the neighborhood who finds a unique way to make friends; Toys Come Home by Emily Jenkins, illus. Westminster School District, the California court case that desegregated schools for Latino children. Yearling dons its armor for Roland Wright: At the Joust? Scholastic Inc. Board of Education Supreme Court decision of Skuse, about the outrageous adventures of teen twins searching for their dad.

Stine, in which two siblings stay with their Egyptologist uncle. Arthur A. Bunce, a sequel to StarCrossed ; The Pet Shop Revolution by Ana Juan, in which a girl helps the pet shop animals make a break for it; and The Rites and Wrongs of Janice Wills by Joanna Pearson about an aspiring anthropologist observing the mating rituals and coming-of-age ceremonies in her small Southern town.

Scholastic Paperbacks changes it up with reissues of The Encounter and two other Animorphs titles by K. Point clicks the mouse with Unfriended: A Top 8 Novel by Katie Finn, which deals with social networking drama and intrigue; and Dark Souls by Paula Morris, in which a girl who can see ghosts gets caught up in romance and an ancient mystery. PUSH catches the subway to Bronxwood by Coe Booth, in which Tyrell stresses about his father just out of jail, his brother in foster care, and his disinterested mother. Little Simon is the life of the party with Hootenanny!

Margaret K. Simon Pulse takes the battlefield with Goliath by Scott Westerfeld, illus. Sourcebooks Fire crosses the goal line with Score! Cast and Kristin Cast, latest in the House of Night series; Glow by Amy Kathleen Ryan, in which a boy and girl en route to New Earth are attacked and separated; Journal of a Schoolyard Bully by Farley Katz, starring a troublemaker who finds a way to derail his journal-writing punishment project; Shattered Dreams by Ellie James, in which a young psychic discovers the truth behind her terrifying visions; and LIE by Caroline Bock, the story of a Long Island town ravaged by a hate crime, told from different points of view.

Tanglewood follows the yellow silk road with Chengli and the Silk Road Caravan by Hildi Kang, about a year-old orphan who works for a caravan in hopes of learning about his father ; My Dog, My Cat by Ashlee Fletcher, in which readers learn about the differences between dogs and cats; Wild Rose Weaving by Ginger Churchill, illus.

Walker Books salutes the red, white, and blue with Americapedia by Andisheh Nouraee, Daniel Ehrenhaft, and Jodi Anderson, a blend of humor and information that introduces the U. Subscribers: to set up your digital access click here. To subscribe, click here. Simply close and relaunch your preferred browser to log-in. If you have questions or need assistance setting up your account please email pw pubservice. New York Rights Fair. Fall Sneak Previews. Sign up for our Children's Bookshelf newsletter!

Children's Announcements. Stay ahead with Tip Sheet! Free newsletter: the hottest new books, features and more. Parts of this site are only available to paying PW subscribers. Thank you for visiting Publishers Weekly.

There are 3 possible reasons you were unable to login and get access our premium online pages. You may cancel at any time with no questions asked. Powerful stuff. An absolutely fantastic read and fantastically RARE! Shown here from left to right are the brand new 20th Anniversary edition and the first UK edition respectively. Don't be a tosser, grab one and go! Let's get back to the music now, with a little-known "holiday" track from The White Stripes called Candy Cane Children from see last photo. Both feature Jack White for those White Stripes lovin' friends.

I really hope you've enjoyed this off-the-beaten-path Holiday excursion, I had a blast putting it together. Hopefully you heard something "new to you" or just fist-pumped along to an old favorite. Join me on Christmas day proper for episode Stay tuned, and thanks so much for listening! Just passed the middle of our beloved month of October, with Halloween quickly approaching. 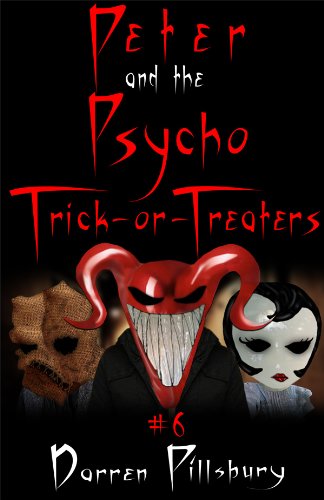 Of course this installment of mini-reviews must be Halloween related, but not in the way you might think. If you've followed me or read this blog for any length of time, you'll know that I like to do things differently, away from the masses. And so it is with this batch of films, which I might add, are not specifically about Halloween, but have the elements within them.

Read on Tales from the Darkside - Halloween Episodes. Labels: s , Halloween , Series. Internet Radio Deadair. This installment of mini-reviews was a delight to write. All three films are favorites of mine and feature a witchy theme, but maybe not in the ways you might expect.

If you follow me on Instagram, you'll notice I post a lot of what I'm watching, which just happen to be films from the 70's, and feature witchcraft in all its varying forms. Well all three below have that, and much more. So put on your pointy hats and read a spell Heads up book lovers! I know, I know, I've done it too, plenty of times, and ruined an otherwise great looking cover all in the name of either impatience, ignorance or sheer stubbornness thinking I could remove it carefully without peeling a part of the cover picture overlay off.

Well, no more of that I say STEP When the fluid has nearly 'dried' seconds , take your Exact-O knife or tweezers, knife, fingernail and gently pry up a corner or edge of the sticker to see if it will come off easily. If it looks like the sticker won't come off cleanly or very easily--no worries--do step 1 again.


Re-saturate, and wait for fluid to evaporate. Now sticker should come off really easily and cleanly. Repeat process again for extra stubborn stickers.

Depending on the type of glue, the kind of paper and what kind of cover you have matte and textured or glossy there may be a little glue left behind. This is where the Q-Tips come in handy. Unlike alcohol, lighter fluid won't remove any color or texture from the paper. And unlike GooGone, it won't leave a nasty, smelly, oily residue that you'll be stuck with forever.

Just let the cover sit for a bit, and it will return to it's original state. There, now wasn't that slick and easy? Use a Q-tip and work small areas at a time. Generally, only the top layer of the sticker seems to come off, despite several attempts of removal without damage. The result looks something like this:. I hope this tutorial has helped you, it's actually kind of fun to watch your sticker-laden covers become sticker-free!


Also, this method works just as well for record album covers too. I love it when things come together unexpectedly, as did this installment of mini-reviews. As a self-professed Anglophile, I was stoked that two of the three films jumped right into my path. All three films feature distinctly British elements, but are very different indeed.

And the best part of all is that each one revolves around music. So lend us an ear, darling, and prepare for another British Invasion! Heck yeah! Once again, I don the headphones and try not to make an ass of myself as I play music for the masses, with the hopes of introducing you to something "new" and exciting.

Tony of the Damn Fine Network graciously asked me to guest host an episode of the illustrious Damn Fine Cast , and I happily accepted the challenge. This episode mostly focuses on songs from some of my favorite films, but with a few surprises too. When I embarked on this journey, I quickly became obsessed with finding vinyl singles on 45 only with picture sleeves, cuz I'm that much of a snob of film tracks of my youth.

But I found more, much more, and began exploring titles I hadn't heard before, but felt compelled to include in the episode. To be sure, I took a few chances, but I think it came out all right in the end.